One of the ton of Race coverage in Barcelona!

This was my last race of the season, and what a way to finish, through my ironman career i havent won many races, a few long course ones but not many although i have been many many times on podiums, winning this one is by right one of the highs of my career.

I travelled early with Vanessa an Helder, i was there on wednesday night so i had my time to sleep late and rest from the regular day i have at home. Everything went quite smothly, my only concern was the weather that of course couldnt control. i have been feeling awesome for the last 2 or so weekes and was absolutely ready for a race.

The forecast wasnt the best but at least it wasnt cold, the swim started at a very nice 8:30 am, the prep was uneventfull and i was happy to get to the start line ready.
The swim was good, i got into a group that felt really easy so i took advantage of this, the only remark i had is the looooong 2700 straight along the coast that never seemed to end. I got out in 56 witch was a bad time especially knowing that i was swimming well, helder imediately remarked that i was only 4 min from the lead and scant seconds from other favourites like Fachback meaning that i actually had a great swim, the swim times where just slower for everyone. going through T1 confirmed that i had a good swim as all the bikes i "marked" as reference points where still racked. 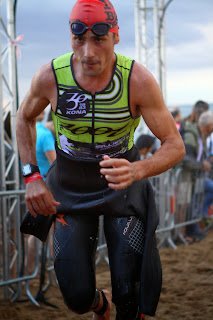 Riding time, the course was essencially a conection strech of something like 5km with very technical turns speed bumps etc until a 2 lap + one short 30 km lap and then again the same narrow roads until T2
I took it easy at the first part out of town, it certanly didnt matter at all if i went like crazy on this early race part. as soon as i got out of town there where a 3 man group that rode together until 45 50km, going to the first turn around was actually what felt harder in the entire ride, after that first 30 km i started getting my legs. At 45 50 km the big pack caught us and that pack included all the bikers that i wanted to leave behing on the swim. There where still a lot of atheletes between me and the leader Konstantin that unsurprisingly was tearing down the bike course. At this time i was feeling very "confortable" and the speed was very high, well above 40Km/h. At around middle of the ride the Pack was huge since i caught back Marcus Fachback along with other Like George Potrebish, all favourites this was when the group started to get smaller and smaller, my legs felt really well and i could matcha any pace on that group, Konstantin of course was already more than 10 min ahead, until the end the only remark was the rain that made the last 5km very very dangerous. I really eased the pace at this time, it was about 7-8 athletes going to T2 separated by seconds and the uberbiker was 15 min ahead. I was anxious to know how my legs would feel when i leave the bike in the rack.... 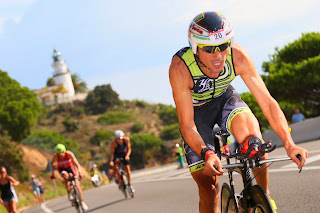 I passed Tom running for the tent and left before him, I started running in about 9th BUT as soon as i left t2 i started hammering the run course,  what a feeling!! running like there wasnt 180km + swim before.... the 4 lap run had plenty of turnaround spots to look at the competition, i only needed 6km to get to 2nd place and at the end of lap one i was already roughly 10min from Konstantin, this was possible, i felt just amazingly fast in the first 2 laps, i knew of course that this would end eventually and i had to worry about Tom since he was running a couple minutes back and still looked strong. at the end of lap 2 i was 5 6 min off and during the 3rd lap, when i started feeling the distance i caught the speedy biker around 30km, after that it was all about checking where tom was and if i was safe, i knew the final time would be fast so that helped trying to keep the pace high as i possibly could. Getting to that finish line first was always that feeling of finishing an ironman... but this time i was faster than everyone ;) i was really happy for this fantastic day where you just feel awesome. 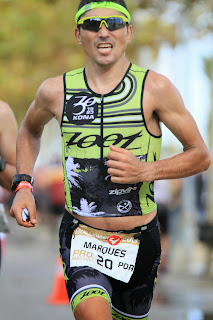 Of course i got this late as i imediately got back to work, yes the regular joe work and im taking a bit of easy training the next few weeks, not much time to celebrate 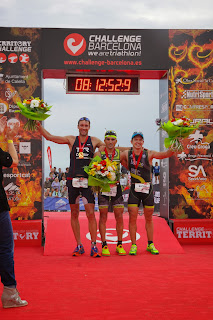 A quick tank you to all the people and companies that support me!!!!
Posted by WC Athlete at 9:49 PM 9 comments: