Lots of time with no news...well i got a good excuse, I've been more busy than i ever wanted to be...

To sum this a bit Besides working i have been doing some post grad studies. So to 8+4 gives 12 hours, half a day i don't have lately, im glad that the PG in getting done (at least the part where i need to be 4 h at school at night) until the end of this month.YEAAAH. But of course its been non stop weekdays from 5:30 to 23:30 and weekend to try catch up with the lack of good sleep. Ive been doing my best to train as well as i can!! What is your excuse to not do an ironman again??? ;)

I did try to race Nice a few Weeks ago but the race was somewhat destroyed by lack of rest and a presentation i needed to do on Friday before the race. i didn't feel like i was getting anything of the race and with Roth close i decided to pull out with no regrets.

As for Roth, I've been saying through the years that this one is one of the races i most wanted to do. Of course my addiction to Hawaii has been bigger but not this year. I decided i would race this one very early despite knowing that i would have some tough months ahead like i said before.

I got a very nice homestay with Kurt Graf and travelled with my GF that was also doing the race (she was 13th with 10:03) and i travelled early (Wednesday) to have some days of school/work and get some most deserved sleep the days before, it was very easy to close my eyes.

As for the race its impressive the quality of this one, the organization is second to none, unbelievable!! Straight to the start (im glad that nothing wrong happened before the race) the canal swim was amazing, the Pros+ the fastest guys all started at the same time, the routine is essentially the same go hard, try to hang to some feet, deal with the water for the rest of the time. I got into a group where i swam comfortably, i got quite a few kicks and punch through the swim, but i was out with nothing to report and my watch still had the 52min going on as soon as stand up, Nice!! it was good, of course time says nothing, i like to compare my time to the other athletes especially the contenders so at the end i definitely had a good swim with regular times at the lead swimmers.

Nothing to say of T1 other than i was out of there with no problems and still with lots of bikes at the racks, i obviously knew that most of my "swim buddies" where left in the water for a couple minutes. Fast Fast Fast was the first few kms before hitting the first short climbs. At around 20 km i passed Caroline, the women's leader that actually swam just a few seconds faster so she must have smoked those first kms. Massimo Cigana passed me with something like 40km and the big group that included Vabro, Zack, Bernd among others caught me. The next few kms where all about hanging with them the most i could, the pace was not constant at all witch i really wasn't enjoying, Then Came solar Berg, you have to do that one time, that's the only comment i have right now, impressive.
Half way and the group was smaller and the "caos" with lapped athletes and relays was big, we had 2 official tracking us down and ensuring that everyone was at legal distance. the pace was still not to my liking and when we hit the biggest climb, greeding, a couple guys got away at the base of the climb and i didn't notice, at the end of the climb i took of too and was joined by 2 other. till the rest of the ride everything remained the same, i have to say that when i passed the second time by Solar berg i was tired and ready to get out of the bike (still had like 20km to go). 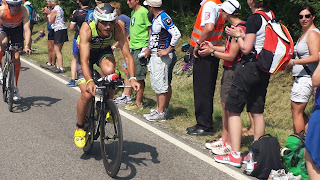 I was really glad that i was out on my feet after 4:38 bike ride. The course indeed isn't slow but it also benefits powerfull riders. The nutrition was good and i had everything under control i tough I(of course)

Into the run, i passed too much time in T2 battling with a sock (how weird is that) so when i started running i already had 2 guys ahead of me a few seconds. I wasn't rushing things, got to a rub 4min/km pace and kept it for 4-5km, with a small downhill at the beginning was somewhere in the 3:50 pace, then came some unexpected problems, diarrhea, i apologize but i really had to stop for like 15times to let something go, i was definitely not feeling bad, when i was running i was running fast and was positive to deal with the Shi$# situation. I was actually more annoyed to be playing yoyo with the guy ahead of me, when i closed him down it was time to stop again ;). Fortunately somewhere in the 20 21km mark it stopped and immediately i started building some momentum and started running at 3:45 3:50 pace, sweet. I wasn't aware of my position as i cant really understand German and it wasn't easy to keep track of everyone, i do know that from km 28 to km 30  i passed 7-8 guys, this never happened to me, what a carnage!! i kept running and hoping for some more casualties, at km 37 i started fading a bit and with the last glimpse of Konstantin Bachor 3-4 min ahead with 2-3 km to go i knew it would be almost impossible to go up in the board one more spot, the day is done... Lets get to the stadium and enjoy the finish line....

I finished 7th and heck I'm happy with this, despite the problems with the first part of the run I'm pretty sure 2-3 min that i lost there wouldn't change my final classification other than a 2:45's run and a slightly faster final time. What matters is that i worked my way around difficulties to be race ready and enjoy another tough day ;)

More sooner that this one

Posted by WC Athlete at 9:26 PM No comments: