Its about time i arrive to St george!!!

actually everything went acording to plan but it was a long journey to get here. The drive from las vegas to St george was very hard, i had to stop severall times to stay awake at the wheel, ouch.

Anyway, im here and im fine, i will need a good night of sleep today as last night was nonexistent. i felt tired the whole day today but did all the necessary stuff including a ride in the loop of the bike ride. Hmmmmm i would say its far from the toughness of Lanzarote but its defenetely a tough cookie. it has bad surface for almost the entire distance especially going out on the slow slow uphill, there is nothing flat except when you get to the top and turn right back to St george. there are a few hard short climbs especially the last one but after that its about speed and downhill, its very fast going back to St George but again surface is not perfect, oh well the butt will suffer!!!

Short swim and short run to try feel the body, during the day the wind picked up really hard and the forecast doesnt look good but other than that everything is cool. Im staying with Eric, Ann and their 3 kids, lovelly family that are actually volunteer captains.

more later
Posted by WC Athlete at 1:59 AM 6 comments:

Posted by WC Athlete at 2:29 PM No comments:

A tall sweedish blond that will remain anonymous confessed in a massage session while screaming in pain that that pain was better than sex...........!!!!!?????? 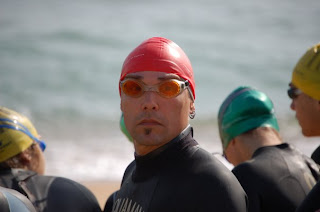 i hope i never get to that point, i do however have a training related good vibes when i it feels so easy to run fast for 1h after a 6h ride, but definitely not sex... ;)

its final stages of preparation for Utah, i have been feeling well in training, a bit tired here and there but overall very good feelings.

I raced another sprint the past weekend, just after a long run (not a good feeling), another fast workout and in the process helping the team to place 3rd, for me it could be better, the swim was very tough and i definitely didn't swam in the fastest route possible, it was almost impossible to spot the buoys.... 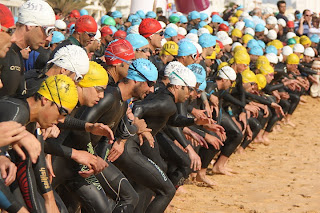 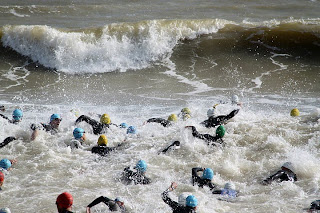 the quarteira aqua park
to make it worse, i messed the transition and lost track of my bike, maybe i was a bit dizzy from the swim ;) but i did lost a big group with this and ended up pulling the bike alone with a few guys on the wheel and in the last lap i caught one of the group that dropped back from the big one that i missed early on.
t2 had no problems and the run was nice, i didn't felt very well in the first lap but in the second i ran almost 1 min faster than the first, nice. 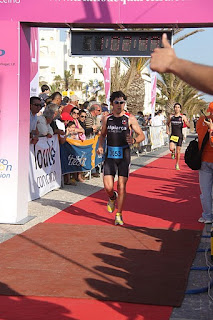 it was a nice weekend in the south of portugal. SUN and friends a good relaxing saturday. 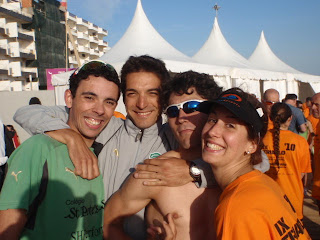 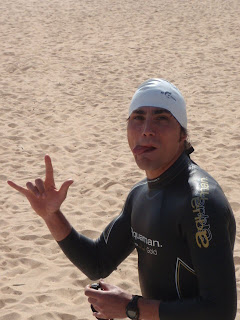 as for training, plenty enough to keep me busy and feeling like a race is a good recovery.

so here are the past 2 weeks totals

this is the final week of good volume...
Posted by WC Athlete at 6:54 PM 2 comments: 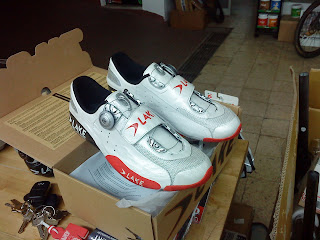 Posted by WC Athlete at 9:28 PM No comments:

that need to read as triathlon season has started...

past sunday the first long distance race of the season was completed.
Porto Santo was the venue of the first venue of the portuguese and iberic Cup race in Half ironman distance.

The small island know for its great beaches had some fireworks with this race in a low tourist season. I have been feeling pretty darn tired (and some times exausted) from training and short races but the 2 days of very easy rolling training really gave me strenght bach, with a good day i was sure that it would be a close race especially between me Lino Barruncho and Pedro Gomes. I had some nutritional experiences to test in this one too.

The day was great and the race started at a very decent 9am, the sea was a bit choppy and with bit waves. i wanted to just hang with the usual guys, Caldeirao and Lobo, i did just that in the first lap and the effort wasnt that hard, i was actually amazed on how fast the first lap passed and was even more amazed to see that one of the feet i was drafting was in fact pedro gomes, several thoughts came with this situation ;). 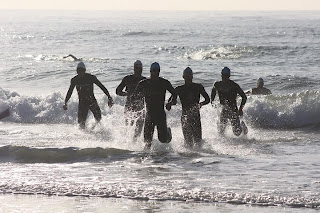 Me (left) and the group at the end of lap1

with the small beach run and with the waves especially one big one tha hit me really hard i lost some ground to the pack, i had to bridge down the gap and did it pretty fast, but at the time pedro and Andre ferreira already took off. I just hanged with Caldeirao and Lobo for the rest of the swim, i was out in about 25:30 and it felt really good. 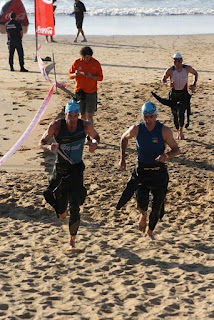 running to transition
jumping into the bike didnt had any remarkable events, i lost some ground with the beach runa and t1 and the pair that make me company took off like it was a sprint distance race. 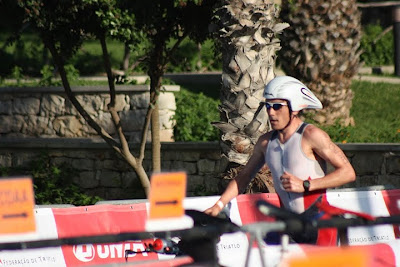 The bike was 6 laps with 5 turn around spots a short but steep climb to a church and the rest was pancake flat with some very rough road sections, the elevation profile wouldnt scare anyone but it wasnt a fast course.
i caught the duo with 5km and honestely caldeirao looked totally out of the right pace, he hanged out for one lap the droped back. 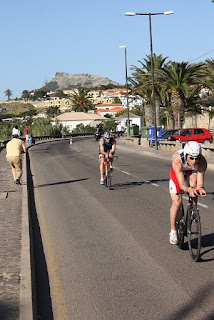 me and Caldeirao
at the time my competition was more than established. Lino and Pedro, pedro was out 30 seconds ahead and gained time very quickly, lino was about 5 min behind me.
At the end of the first lap pedro had 1 min and lino gained time on me too, at least visually. 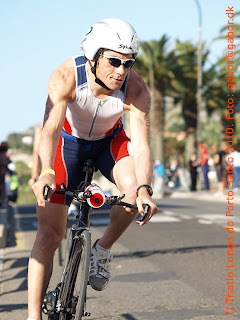 I felt fine after that first lap where i normally feel a bit shaken from swimming. 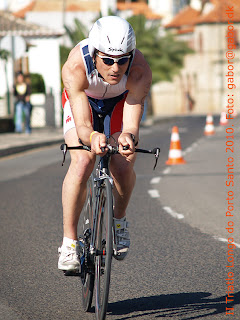 after that both Lino and pedro gained time, i needed to worry with both and especially leaving a big gap enough to stay away from lino in the run... I was 1:15 and 1:30 from the lead at the end of the 3rd lap and after that i started gaining time to averyone, i was about 40sec from pedro and around 4 min to lino that lost a bit at the final laps. Finished the ride in around 2:16. 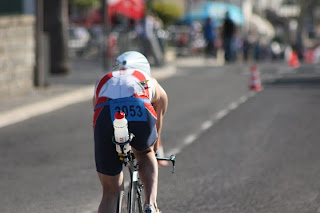 looking ahead to another turn around
It was time to run, i saw Pedro leaving T2 and wondered how fast he would run... i was sure Lino would run FAST. 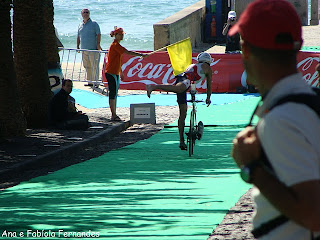 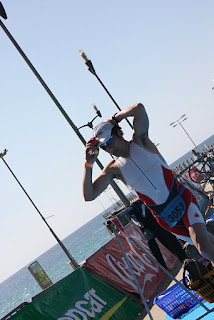 me going out of T2
Run was a flat flat 4 lap course with 3 out and back parts. I was seeing Pedro and was clearly gaining time and feeling fresh and running very well. i caught him coming back to the finish area and he made no intention of joining me. 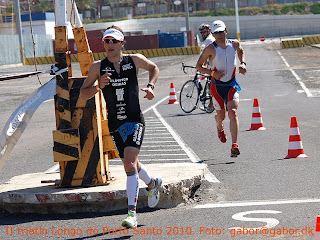 At the time Lino was already just over 3 min behind. I needed to keep a fast pace if i wanted to stay safe lap 2 and 3 i had company of a laped athlete, that is well know of me, Custodio Antonio. ~ 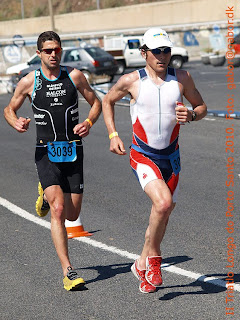 he is also Lino team mate so i was sure he wouldnt help me at all ;) 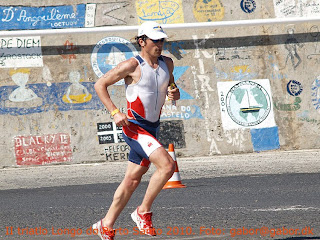 the end o lap 3 i was clearly suffering to stay far from Lino but i was already with JUST 50 seconds to Lino. CRAP, it was clear to me that he would probably catch me, and i did my best to stay away, unfortunately he caught me with around 2 km to go at the last turn around. 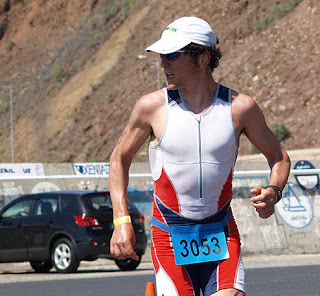 This is it, the best photo of the race... "S#$% he is just behind me";)
i was really tired and didnt even tried to hang with him, i just told him "Awesome race" (in portuguese of course) and settled to a recovery stride, i still lost one minute with this but there was nothing i could do and i was more than safe from pedro. I finished the run with 1:13 (Lino did round 1:09!!!!) and 3:57 total time.
I am of course really happy with my race, felt good swimming biking and running, im in far better shape than last year, the race venue and organization was great, good thing will happen :)
to finalize, my week totals
Swim:
18,5km
bike:
340km
Run:
90km
Race:
2nd at Porto Santo half
Posted by WC Athlete at 3:01 PM 8 comments: