3 IM in 4 weeks. ive done some silly stuff, this places very close of the top if not up there.

Ironman Frankfurt is of course one of the biggest races in the world and for some the last chance to get in the cut off for hawaii for so many people. Despite having held of in Zurich to help recovery, it didn't happend that way. First week after Zurich i felt good especially at the end of the week but in the week leading to Frankfurt i really didn't feel that good, needless to say i have an excuse for that ;)

Weather wasn't fantastic during the days i was here looked more like a winter day in Portugal but according to some forecasts it should hold on to dry conditions on race day witch clearly didn't happend.

The day started with clear skies indeed when everyone was preparing the T1. i got there a bit late so i really didn't have much time other getting the things done  and get into the water, no time to freak out... The swim course was quite nice, well marked and not boring. i didn't felt good and powerful in the water, a consequence of how my swim form is going downhill since IM france 1 month ago. from a great swim in Nice loosing a couple minutes to the lead i got a decent but not awesome swim in Zurich and now i got a slower swim, not terrible but you get my point. basically and since i didn't felt any good i got into a group and let thing flow. but i was surprised to know that Riesen that had the bike right at my side in T1 was 1 minute ahead when 2 weeks earlier in zurich he was 2 minutes behind (he eventually DNF in both races) anyway i swimming is the part where i most felt the fatigue of the last month... i thought.

Time to ride. I remember being at the water and while breading and spotting a BIG cloud was closing by and in one of those occasions where you just think in something else other than rotation your arms i thought that those clouds didnt look any good. It took about 10 minutes of riding to get all (or stay) wet. I hate this was my thought. I rode steadily but wanted to catch guys in front of me instead of being caught. Everything seemed to be OK, i was feeling OK eating well but the temperature dropped a lot with the rain and i was suffering with that a lot and loosing my concentration in just pedaling. at around 40km i spotted a big group in one of the twists and turns. Dealsaut was there (his bike is quite flashy) and i spent around 60 km about 20 30 seconds from them, i was getting really annoyed for not getting there, closer some times but them their pace picked up and i really didn't want to get into those games. at the end of the first lap, around 105km, i was shivering hard and saw my life going backwards at that time. i was 1 min behind that group and had the chance to warmup a bit with a few minutes of time out from the rain and some tailwind. i was so relieved to start feeling my body again!!! even so i went through 110km with something close to a 4:40 bike split pace witch sounded great.
Soon enough i passed delsaut, that group riding in front of me seemed to have exploded and not so far ahead I exploded! WOW i really blew up really hard like i never did in an Ironman Ride ;) i was "caput" and all happened in a very short period of time. the last 40 50 km took forever to go by especially as i had the company of rain and cold again, i couldn't even get my powermeter above 200w more close to 170 or so. Nice

I came out of the bike in such a bad shape that i almost couldn't run...really. But i really wanted to get through it and finish my own craziness of 3 IM in one month but i was really struggling this day. i started running so slow and it was hurting so much that i was thinking that this would be the day i would walk in a marathon. I stopped in the toilet to loose some weight (didnt really needed to) but mostly to get my body together. after that it was all about doing my best to stay in one piece through the run. Not sure but i believe that the first lap was by far the slowest of the 4. that because i got into some decent rithm after the first lap, decent considering how blown and melted i was, to say the truth i would never imagine running as "fast" after T2. I really didn't care much about the position i was, i only knew about it at the end of the race. it was all about letting the kms pass. witch eventually happened ;)
finished 16th but for me that not really important. i can now brag of doing 3 IM in 4 weeks. stupidity i know but arent we all? and the first 2 where really solid performances i only regret of helding back in Zurich for some damage control that really didnt help in Frankfurt. Im definetely an ironman But im not made of iron...

It was too bad that the weather sucked in frankfurt its a great venue (yeah another one) but the rain really took people out of the streets, even so there was tons. And of course its so hard for me to race in the cold and rain, i just hate it.

so now its time to rest a bit. i really miss those blocks of training where you just...uuuh, train for something up ahead.
Posted by WC Athlete at 7:48 AM 4 comments: 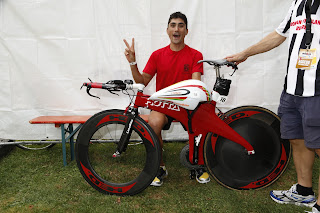 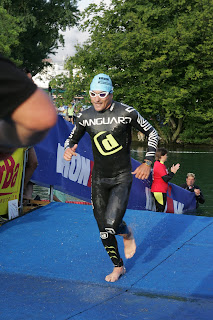 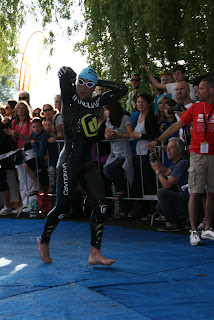 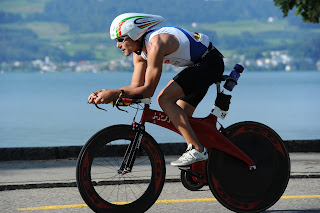 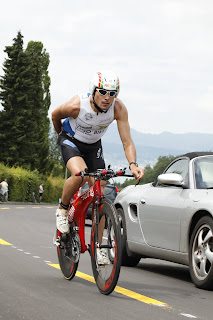 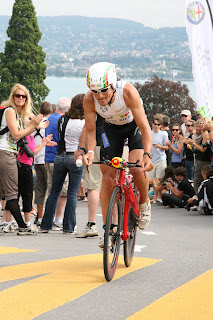 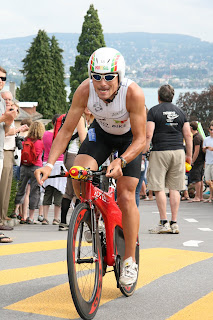 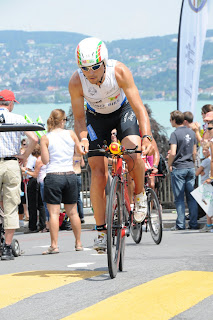 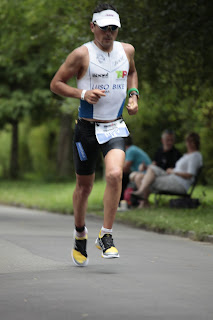 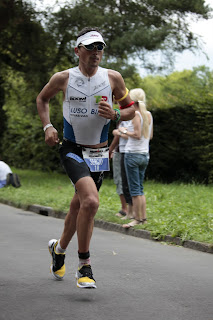 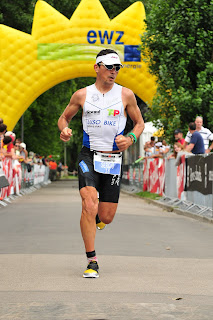 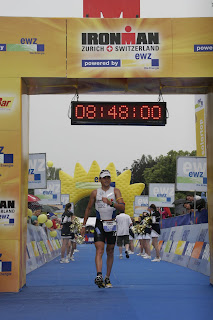 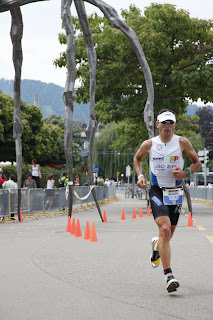 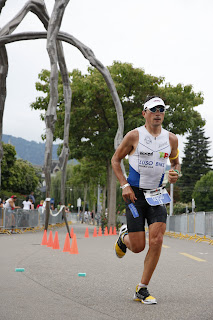 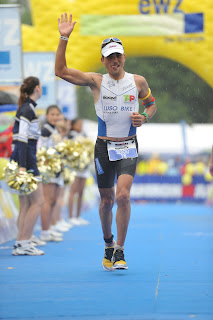 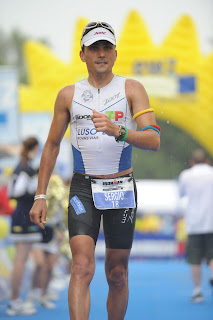 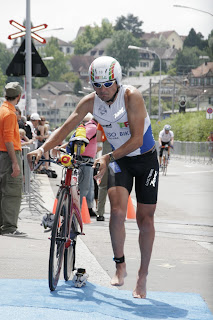 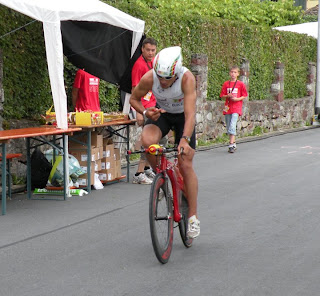 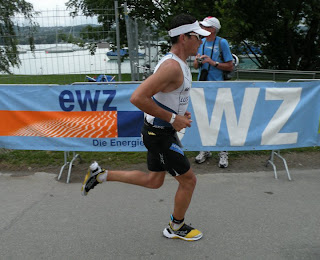 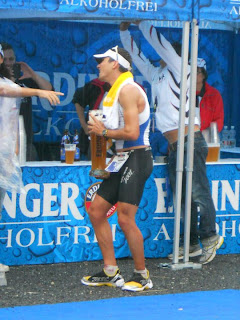 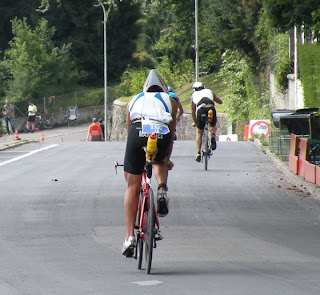 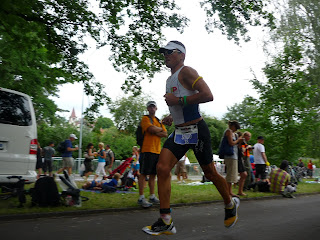 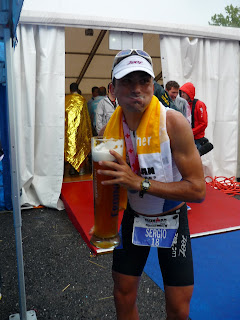 Its done and in my opinion, well done.

The goal for this race was doing the best with the least as possible. Having done IM Nice 2 weeks before demanded that.

The race venue in Zurich and Zurich itself is a lovely city, too bad i dont have time to really see the city...
I started feeling better this past week so i was expecting to have at least a decent performance although you can be sure, i had a small portuguese crew in site including my coach that was in the course to check the race and his 2 Sergio´s, me and Sergio Costa. Arriving on thursday left not much choice other than taking the most time possible to rest as those are the only days i dont really have to work ;)

The swim in Lake zurich was awesome, the buoys where hard to spot, they where too far away especially with the sun coming out, speaking of sun, the weather held pretty well except in one part of the run where we caugh some nasty thunderstorms, we had some nasty weather these days in zurich. Anyway the pros left at 6:55am, after the first buoy, probably 700m i was with riesen at my side along with others, i now live confortably with the fact that my starts are slow to actually hang the most i can in the faster groups and just hope i can catch someone faster than me like it happen in Nice, i started leading that group already with my "cruising" speed but the next group was already to far forward. i tough i had every one in my feet but when i exited the water for the small run to the second (and longer lap) i saw anyone... so that made my swim a lonely one again, i eventually passed a guy in the second lap but it really was an solitary effort, i left the water with Helder already mentioning that the times where slow at the lead and ishould be worried about the time i had in my watch.

After a beginner T1 with some extra meters and making sure i didnt loose my gels i got into the bike, i was sure that i was in front of good guys so i just cruised in the first kms trying to settle down from the swim. Mr Riesen passed me at around 15km and i tried to follow, witch i did for 15km then i dropped  with the feeling that i needed to take of the entire race. Somewhere in 50km Chris Brader and mike Shiferle came by in an dowhill where i was taking easy because i really didnt know the course, i did the rest of the lap with them, i was feeling good legs at that time but i wasnt worried about going faster. Mike eventually took of just before the first climb in the second lap and Brader droped in the beast climb. I got to T2 with a decent but not great ride and wasnt sure how i would feel with the zoots on my feet.

I felt pretty bad at the begining, slugish and with not much energy but after 3-4km i started feeling my running legs. there where some guys to catch since i was running outside the top10. Helder Krepe and Sedi where keeping me updated all the way since the course had just so many spots where i passed like 20 times. I was moving in the field with Helder always screaming something like "Get them but go easy" words of wisdom??? ;) i ran so confortably the whole way (except of course the first kms) that i got bored in some ocasions. in lap 3 i got into 6th and at that time Helder "ordered" me to roll to the finish, not wanting to get him angry in the first race he watches as a coach i did so, i was safe at 6th but had a big gap to 5th so i rolled to the finish. This was by far the "easiest" marathon i ever done, never really suffered to keep a good rithm arounnd 4min/km and if someone can chime in and say bad things about that, i felt really well doing so and besides i can always say i did an ironman 2 weeks ago ;).

At the end, job well done 6th place, 8:47 is great for what i expected, another well executed race, this one with different goals than the usual "get to the finish line as soon as i can" that i so often say. the morning after as i write this i feel pretty darn well for someone that did an ironman.

beautiful isnt it ;) ok seat post is a bit off but i really didnt have time to tune my corima seat post to acomodate the rails of the Selle italia Optima (or any of the new generation carbon rails) 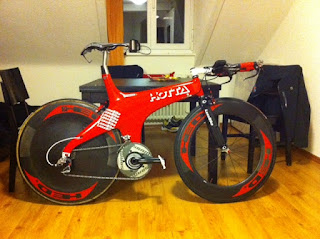