That was not my plan of course, i was counting on being sored from an great racing day in vichy but as i wrote it did not happen. I was totally free of physical stress from finishing the race but during the last days i lost quite a bit of weight despite forcing food down the throat i still have some leftovers from my episode.

Anyway after vichy i decided to race and Guadalajara was just there for me, i registered. I travelled really late on friday, got there (700km) at 3 am slept 5h and ready i was.

Guadalajara, the oldest triathlon in Spain and for that reason a classic race that is one of my most visited events apart the ironman hawaii.

The race started as 1:30pm with a one lap swim, i had a great swim, after 400m i was out alone with 2 guys ahead, Castro and Custodio, knowing those guys well and their swimming capabilities i was happy to be closer than usual to the lead. behind me when i looked back there was one big pack of swimmers. 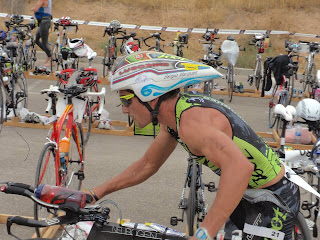 The bike remains a brutal course this year with quite windy conditions, i felt sluggish at first but soon felt the legs, in that process Gustavo iglesias, a former pro cyclist that became triathlete passed me with such a speed that i didn't even see him disappear in the horizon ;). at 30km i caught David castro and remained 100m back for a while until another climb to pass, that was a good reference for me. the rest was all about going through the rest of hill and wind and see what was the status at t2 where i came 2nd. 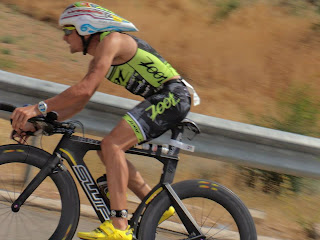 10 min was the gap to Gustavo, WOW. i had my powermeter installed for the first time in more than a year and i knew that i didn't had a bad ride but that was a big gap. 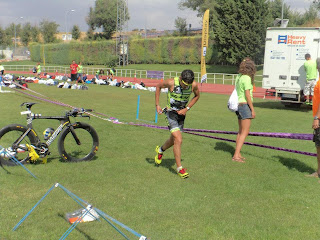 Knowing that and since it would take something out of the normal to cut back 10min on an half ironman my first concern was knowing where the competition was, an easy task on the run course since its mainly 3 out and back sections. Almagro was roughly 2 min behind, a comfortable lead that i needed to make sure its kept that way. so first lap i ran comfortably hard, like any half ironman pace and see what happens. i stretched the lead so i assumed that i was safe and started running at a easier pace, i wasn't getting nowhere if i went hard to the finishing other than sored legs. I did 2 laps with a similar pace to a full ironman and actually felt amazingly easy. 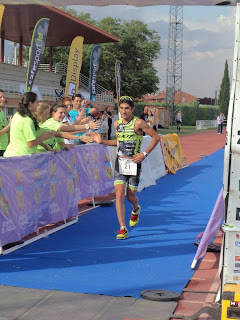 2nd place in no more no less the 3rd straight year with the same result. i would be happier with a win but 2nd cant hurt either ;) 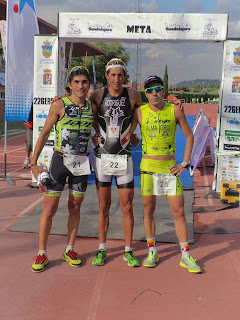 Now its all about getting ready for challenge barcelona witch as i see it will be a cracker with a amazing field.
Just after the race it was time for another 700km back home so the 30h math was essencially 14h driving 5h sleeping 3h going through racing procedures, 4h racing 1h eating and 3h of random post race stuff (including shower ;)
needless to say that today, after a 3:30 ride i spent the whole afternoon getting sleep in!!

Just a quick updated about my race in vichy.

Its a bitter sweet taste that i have.

Everything, i mean everything went perfectly before the race and i felt great up until the very last meal the day before the race. At 9pm the sad show of vomiting all over the place and again at 1 am leaving me in a destroyed state. Unfortunately Vanessa witnessed this all all night long.

The morning of the race i tryed to put in some calories, went for the swim, swam the best i could with the conditions i had, hoped on the bike and at 30 min roughly breakfast along the first gels (i assume) came out also at the side of the road, expected. frome then on it was all about respecting the "race" and in the process hlep Vanessa establish a new PB and getting 5th overall. I beat my PB as well as the full distance ironman without calories, not even coke lasted long in my stomach.

Anyway, i know i was fitter than in Roth, but couldnt deliver. tough luck, life goes on, i love this and look forward to the next one ;)  This makes the digestion of this race a lot easier, ha literally... digestion !!!
Posted by WC Athlete at 8:31 AM 2 comments: