Well its done, the race that is.

Very far from every expectation i had and that might be entirely my fault.

The prep was absolutely great and race week rolled smothly without any stress or surprise, i was feeling ready and in good shape for my 6th Ironman World Championship in the pro Ranks, something that in the current days is hard as the weather in hawaii. I defenetely wanted to top my great season with a great race in hawaii. It didnt happen.

The swim started at 6:30, men only with women pros 5 min back. i got into the 4th spot of a chasing pack early on, i would assume that around 500m the 3rd in line pulled out of the pace line and then died leaving me suprised and altough i tried to catch up it didnt happen, 3000 meters of front pack swimming as i felt a hand toutching my feet here and there. i was a bit anoyed of missing a group again, it really isnt my cup of tea. i have been swimming without those feet that do so much wonters in open water. Anyway i got out with 1:01, the ladies came out at the same time as me, i felt it was a good thing but would soon be my doom.

T1 flew by quickly, i was out in the bike with the first pack of women and like i said i felt it would be usefull to get advantage of the nervous ladies to stay cool and get into my rithm before the real race starts, the out and back in kuakini was all about that, getting the blood into my legs in that time more ladies got to the group i was leading with Santamaria. Palani hill and away we go, not quite, as soon as the group established into a pace line led by santamaria the nervousness of 7-8 ladies got them into the front, it was quite messy back there. One of them slotted right in front o me while i was in the legal distance of santamaria, and its very easy to control that using the cateyes as instructed in the pro meeting. now if you making a pass in a legal pace line you got to pass all the pace line, is that simple and it is cristal clear at the meeting. not for this fellow girl. she slotted right in front of me and nubmer 3 marshall that i suppose was coming from behind awarded me a red card. this was just too soon. What a disapointment, at first i kept on going without thinking much about this, the penaly tent was a few kms later. in the process i tried to save some energy again in a pace line again Caroline did the same as the other girl and she got a penalty right in front of me, same marshall!!!!! strange. 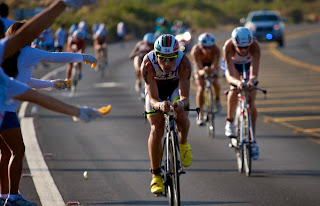 got to the tent with steffen and after the 4 min chat it really got me, i was out of the race in my head. I was defenetely prepared for everything else but having to serve my first ever penaly in such importat race in a such important part of the race was a bit too much for me and im the first to say that i was weak.

There is nothing more to say about this i went straight to just finish mode until T2 and for the marathon i found a good objective to roll the 42.2km, help my friend and contryman Marcio neves get the better of his race and paced the whole marathon for him and even did some catering for him too ;), i was really happy to do so and even more to see him get the AG 1st place, congrats to him!!!
Vanessa also had a good day shaving her PB and placing 4th in the age group a good day !!

So, after this i would say i am disapointed with my attitude and race BUT and its a big BUT it doesnt change a bit of what i feel about my season, 3 Top 5 finishes, one podium is right there on top in my best seaon board.