yet another race that wasnt perfect, i really need to nail this thing :P

Aveiro was held yesterday, i was second again in the national portuguese champ this time for Pedro Gomes. This time i didnt ride like i should.

The swim was good and bad, i felt great so i decided to swim a bit more, it was a total stupidity, despite the very well marked course i was all over the place cursing myself for a very very very poor navigation, i wont say i would be X time faster, it was just too many rookie mistakes just in the swim. cant really believe that!!!

Anyway it was time to hit a 7 lap course in the bike. just around 1st turn around i established as the 3rd place, around 1 min behing pedro and with rafael 20 seconds ahead. but soon enough i realised that i didnt have the legs to have a good ride, i suffered to just stay in 3rd witch i didnt as David rodriguez passed me in the 5th lap. in the process pedro put me another 6 min and i passed Rafael to hit T2 in 3rd. I was sure pedro needed a very bad run for me to even think about winning...

The run, i was curious to see how i felt after 90 km with my legs burning like hell. First things first, i had David ahead and i started very fast to get him, but i felt pretty decent so i kept going at the same pace until he dropped, then it was all about building a good enough gap to stay safe in 2nd, pedro just had too much advantage after the bike to think about him, so i kinda cruised the rest of the run but while running fast, i liked how i felt and that might be the only good thing about this race :P

i was a bit bummed only for my ride as i felt awesome in the swim (navigation excluded) and running, my performance in porto santo was a lot better but that doesnt matter now. I will go to Font Romeu in a couple of days to prepare my next race in vitoria, Me and pedro will be the boys who will represent portugal at hte european LD champs. time to work together, like we have done for years to get good results there.

more soon, probably at higher altitude
Posted by WC Athlete at 7:34 AM 5 comments: 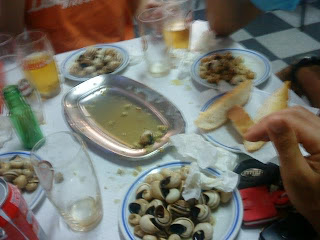 Good recovery meal
Posted by WC Athlete at 12:51 AM 1 comment:

back to the real life

Yep, back to training and work to have € to be abble to train and race :P

my mid season goal is both European LD champs and World LD champs, first of them is Victoria in Spain. at the end of june.

I recovered pretty darn well from St george and will race a national champ Half distance race at the end of this month till there there is no racing for me.

meanwhile, Larry Rosa sent me those fantastic pics. He is good, very good 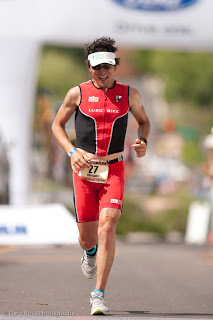 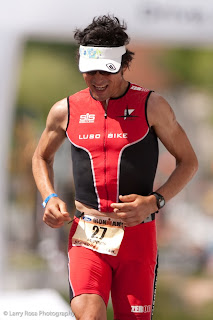 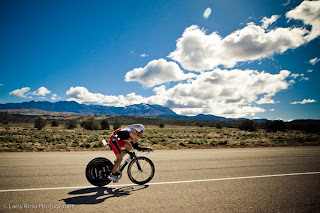 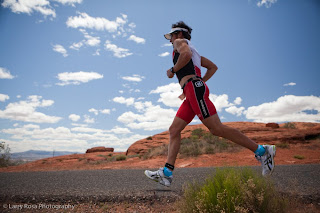 here are a few photos from the race.. 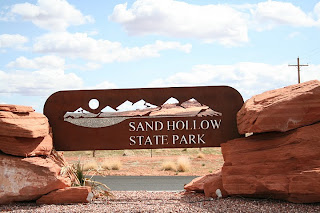 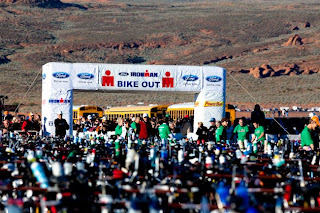 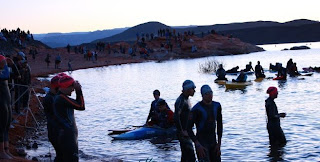 im the guy in the middle looking to the buoys far away ;) 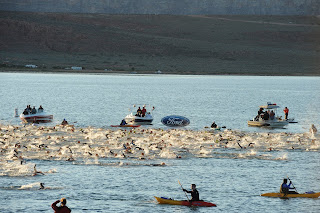 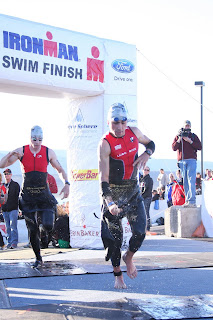 out of the cold water 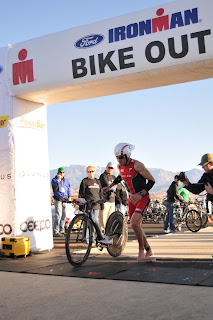 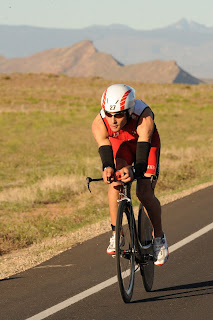 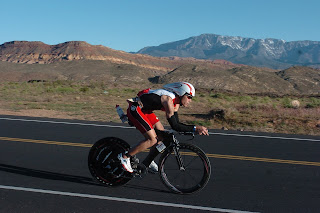 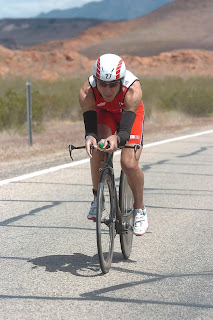 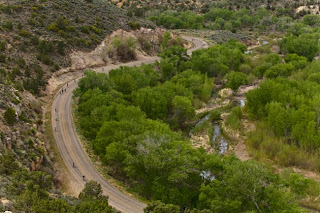 the view from the most dificult part of the ride 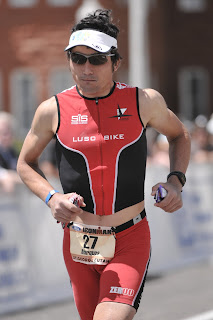 at this time i was ready for the hunt :P 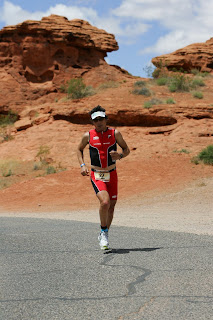 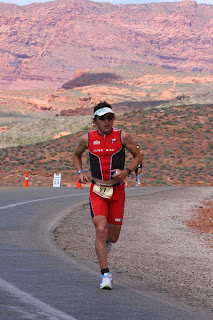 me being hunted. Hurting 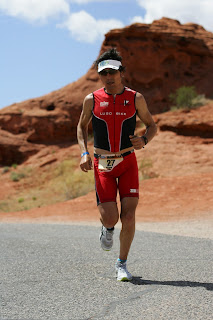 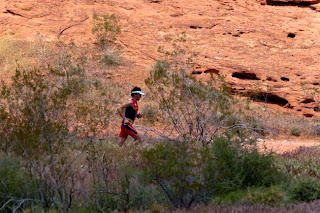 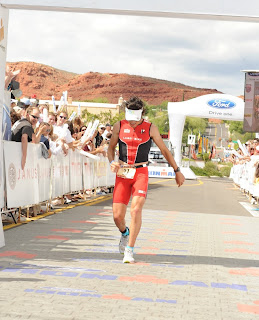 something about the thing im riding this was by far the hardest finish i ever had!!!!

The run, clearly my strenght this time was my weakness!!

ok, my goal was getting to the podium, it was something i confessed to a lot of people, even with this impressive field.

The water was cold but managable, i have been doing some fast swims back at home races and was confident that this year i would have good swims in Ironman. I started pretty well, felt a good stroke from the begining and tried to catch a good group. i got into what i tought was the second group and sit on the back, probably a mistake as honestely i felt strong enough to get at least in the first spots of the group to prevent any breaks in that group witch i think happened. for most of the swim i felt confortable but i do have to ask apologies to the athelete in front of me, i was a bit annoying :P
i got out with somewhere around 54, hmmm i messed it again i tought but soon enough i was told that the lead got out in around 52, THAT is not bad now i know that it was more on the low 51's but at the time it was a booster especially when i got to the bike and there where a lot of them racked.

onto the bike, it was cold!!!! i had a hard time with this especially going downhill, Weiss passed me before the 10 mile mark and he was flying as results have shown. after that i felt alone, i caught brader and passed him but he passed me again already in the 2 loop course, i was riding somewhere near the top10 with 7 min to the lead at around mile 30. the uphill was haaaard, uphill bad surface and head wind, what can be worse right? i almost caught brader in the final hill but got away coming back to st george, i had to coast a lot to have some fluids leave my body and that was enough for petr get on my "wheel" just at the begining of lap 2 he mentioned that we where 9 min behind the lead group, that is not bad i tough, with around 45 50 miles to go it was defenetely not bad, i had the normal routine for the race, ride within myself and run fast so this was kinda good news if i didnt loose to much time in the rest of the ride (now i know that it was true about the group but he was forgeting about weiss that was way ahead). 2nd loop was easier as it seemed that the winds calmed down a bit, i was riding with petr and we caught brader again and styed together ,kinda, till the end of the ride, i had to let go another big quantity of fluids, and this was the only strange thing for me on this race (aside from the run :P) i took advantage of any big downhiil to let go something and it was  lot. Anyway, back on the ride, getting into T2 i saw the lead pack still in the middle of diagonal street, a quick math would put them less than 2 miles away, so probably less than 13 min. Already with a big gap to the lead was Paul Amey, i honestely tought, "you are the first", i was really looking forward to put my feet on the ground and run fast :P

After T2 i tried to get to the magical 4min/km pace, petr was a bit behind and brader got a gap in the final kms of the bike and i caught brader with around 2 miles into the run, after that it was over, oh man where are my legs, i was toasted and reduced to survival mode with 2 miles of running!!! i passed amey that was walking and i flet like doing the same or just pulling the plug and dnf. I was passed by petr with around 6 miles, i didnt even tried to keep up, i was hurting too much, brader passed me coming back to finish area and i kept my litle slow pace, one step each time :P. fortunately i passed luke that was walking and soon after that i passed brader again, this time for sure, i was in 7th and actually was gaining time on petr but it wasnt something i was trying, it was more petr fading other then me going any faster.

it was a relieve to finish, it was really hard to run this marathon, with something normal i would of course (duh) be in the top 5 or top3 but it just didnt happened and im actually proud of just going through the marathon despinte all the toughts of walking or pulling out of the race.

i think it could be better but neverthless im happy with another top finish and swim/bike performances but the running legs where left in the bed this morning hahaha.

this was bit longer of a report than i expected