patience still pays off at the end of the day

yep, Its done, another IM.

To sum it up very shortly, im really happy with my race overall, i was really patient even when thing werent working out as planned, let get to the point :P

The swim was off from what i expected, i was hoping to get out of the water with mr Temmu toivanen like i did in lisbon half. instead i lost (i now know) around 3 min and already had Mr big guy Juhanson on my heels. This time on the swim, was crucial to my mostly alone bike ride. at the end that few minutes make a real diference in the bike time, i have experince enough to say this, the "out of site out of mind" id big in ironman racing. I had "ords" of age groups going by me at the begining of the ride but i kept myself cool and not freaking out trying to keep theyr pace. Speaking of pace, Ain alar juhanson went by me with around 5km, i looked like i was riding a trycicle :P. Kai passed me at the same time i passed the women leader, another "see you later" i tought. I had a hard time setling to a good pace, everything seemed hard, it was not until around 2 h into the ride that i started feeling strenght in my legs but with 2h the big mountais also showed up.
The course is brutal i must say, wind, lava mountains unbelievable views to the ocean and lava (yes i noticed that), its brutal, really really tough. I highlight the last big climb of the day that was one of the parts that i didnt see with my rental car, Bloody mountain!!! at the time it felt it was over i would take a small curve and there she is again uphill, Brutal (did i say that again?)

anyway, up and down i was feeling good and with the good feeling came the time to pass people, unfortunately i was loosing time in the downhills since i didnt really know what to expect and for sure i wouldnt risk cliff diving. We had a very fast part of the course with tail wind and that felt good. with 140 a lot of athletes started dying and i was feeling good. I had no split to the lead, not a single one, that is one of the problems of racing alone, so i was dying to get to transition and see what the hell was going on. I felt great in the last km of the bike and could only hope for a good pair of running legs.

T2 bla bla bla, i started running. The run is 4 laps of 5.250m out and then back (10.5km) the plan was of course try to hold 4min/km as long as i could and see what happens. That meant that 20min and some change would be needed each lap. Competition was all over the place, i passed a lot of people at the first lap, very few on the second and another handfull of guys on the third last one i was getting toasted too :P splits where something like this: 20:XX 20:XX 20:XX 20:XX 20:XX and almost 21 where tha laps i took before fading to a survival pace, last 2 laps where 22:00 and around 23 for the last 5.250km. and finished 8th with the fastest marathon of the day, so they said...

The race nutrition was PERFECT also 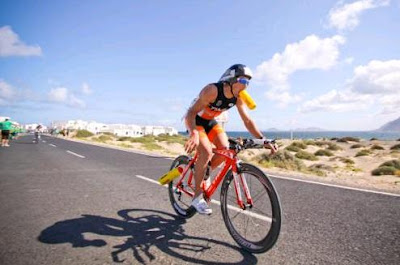 Im happy, in the leader board it may seem worse but for me i was a waaaay better performance compared to my last good IM result (louisville), but those little details that at the end are worth are still missing.

I was putting tremendous pressure in my self to race well, im honest. and i feel a lot better now.

i also have a slot but im not entirely sure if i will take it. something ill decide in the next few hours.


I think i didnt forget to mention anything. sorr about the bad spelling and things but i really want to get out of this computer :P
Posted by WC Athlete at 9:13 PM 14 comments:

i got here yesteray at around noon. Its a weird island, but the desolating landscape makes if nice.

I Spent money in myself (timex joke) with a last minute car rental since race activity is between club la santa and puerto dela carmen, this way its a bit easier for me as im alone...unfortunately.

I went straing to club la santa to make my registration and came back to puerto del carmen where my hotel is located and around 10 min walk to race start finish. I slept most of the day, at least that was how it felt. woke up 5 am and had a nap while flying to madrid and then from madrid to lanzarote, that made the travel a lot easier but i arrived kinda tyred anyway, after the check in/grocery shoping i slept from around 5 till 8 pm, made some dinner and went to bed at around 10:30...woke up at 7:30 for breakfast. That was a great day of rest :P

Today after a nice breakfast i went for a 40 min swim, did the whole loop of the swim plus some short efforts in the beach. Built my bike and went for a 1:15 spin and rode a small part of the loop. Made a delicious pasta with meat sauce (im a great cook) and relaxed a bit while watching the giro, that was nice. After that i went to the breafing in club la santa and drove a part of the course...and here am i after another home made dinner. It is obvious the i have a lot of free time with this post eh?

Ok about the course, it is tough indeed. I only rode like 10% of it and in total i probably saw 70% of it. Its a course where the ones that had the chance of riding it while training or already know it from previous years have a great advantage, so being new here we will see how it goes, there are some very tricky parts but overall i think i will be just fine.

Im feeling great today after so much sleep so i cant wait until is sunday...


a few photos and im out of here

My apartment view, the swim is a bit further to the left 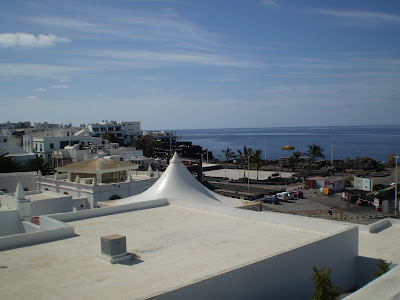 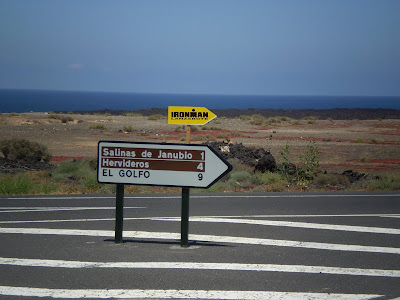 Yes the course is very scenic.. 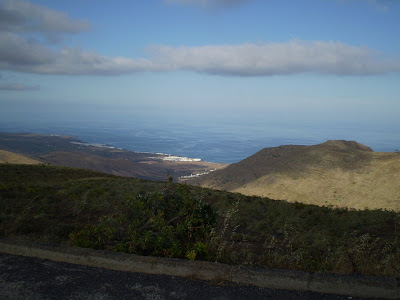 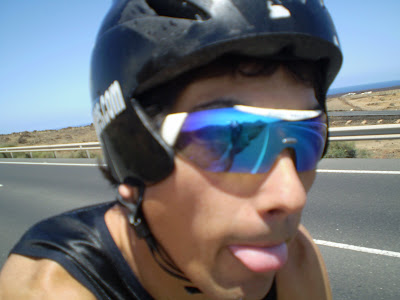 Im traveling on wednesday and ill be there to perform :P

I've done the homework, ive done everything that has been requested to my body and im feeling fit. it was a tough few months, ive lost around 7kg but the work is here and im excited for saturday to come around. Of course when i get there i will be shiting on my pants but that is another story.

Taper was A LOT diferent than what im used to do. no im not doing the no taper taper but it was well, diferent. 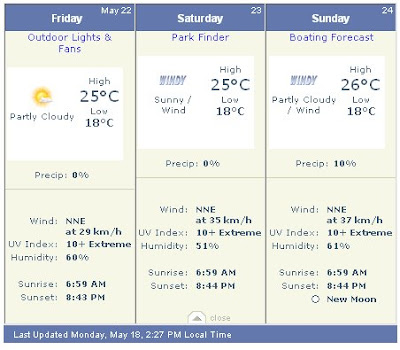 i have no clue that they did this in Acores (portuguese islands). I know that there is a lot of this in spain (pamplona is probably the best known), but still a few dozen of minutes of crazy stuff and "what are they thinking"

-Preheat the hoven to 27ºC
-Run steady for 45 min
-Get to the local track with no soul there, this one is enough 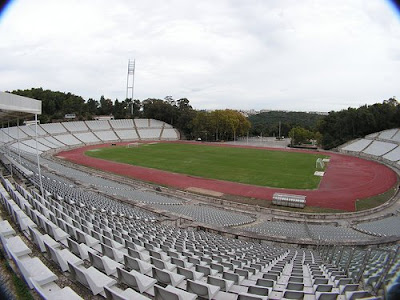 -increase the temperature to 30ºC
-Start the big water cannon to irrigate the football (soccer)field grass and with the gentle breeze, a quarter of the track has is sprinkled with water
-do 2X3000m with 400m recovery
-Grab a powergel
-head out for a 30m run in the shaded trails around the stadium
-go back to the track with no water cannon 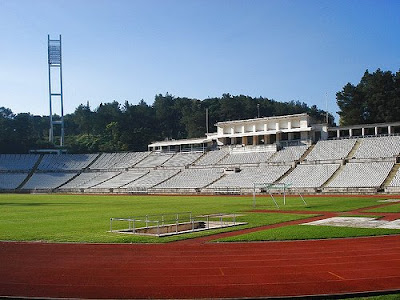 3 days of very good training, the big number was the 450km of rididng in the awesome and quiet roads around tomar, batalha, montargil and all the surronding areas.

the yesterday ride was awesome, Sergio and Rodrigo kept me company while staying in my wheel :P it was a great day. Despite a early "lost" episode we still went for the LOOOOONG loop that i had planed in the map. the result was 215km that felt great, rodrigo hit the wall with 180km and sedi did well too :D

here is some video and photos 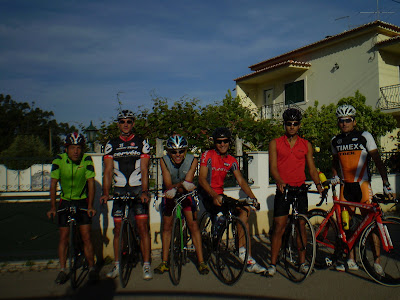 the gang before the sunday ride shorter for some 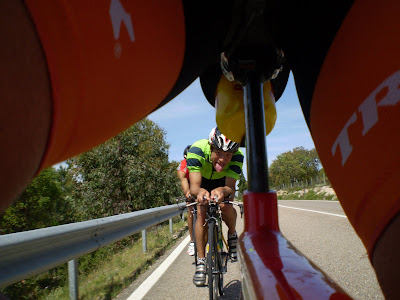 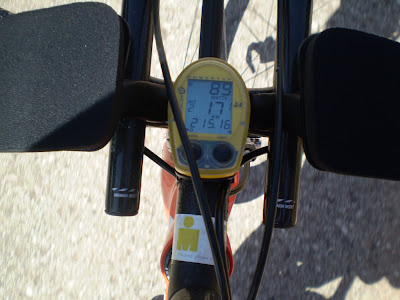 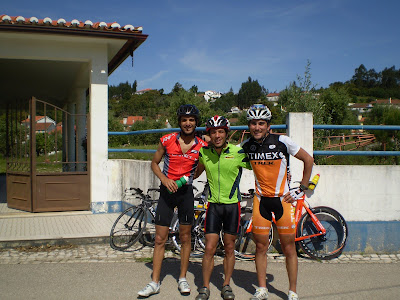 this of course was a destination for me in 2005 hot month of August, you could actually see photos in one of my old sites that unfortunately i dont have any more.

I took advantage of a friday holiday to grab some friends and drive up here (170km). And of course its always nice to log some long miles in a diferent place and this area now is fabulous.

Yesterday i had a long workout that was suposed to be 5h+1hrun but since i mizcalculated the distance and especially the toughness of the chosen course was more a 5:30+40min run.

the course was this one

And it was fabulous, the locals can understand where i was :P

I rode with sergio as the rest of the guys got here yesterday afternoon.

Today i had a open water swim, a 2h easy ride and im leaving after this to a longish run. 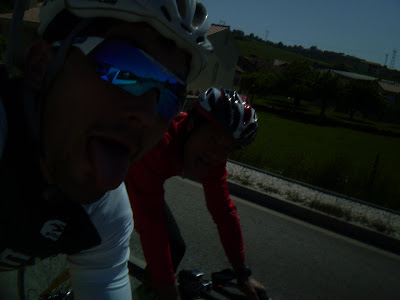